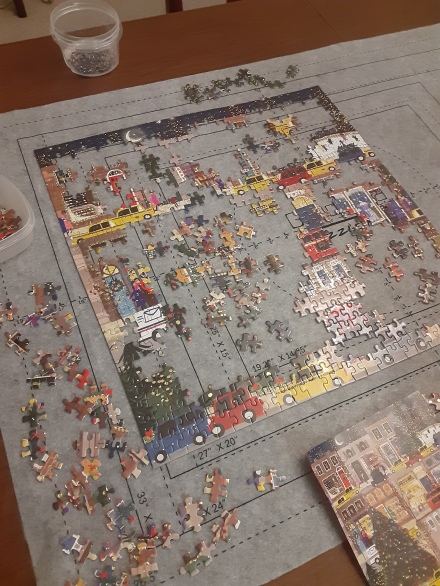 Many months ago Cheryl started on this puzzle. I wrote about it before. I could figure out exactly how long ago but the specific span of time is actually unimportant to the story. Last week when Cindy came to sit with Cheryl for a bit so that I could go do whatever I wanted to do by myself, I said to her that she could help Cheryl with this puzzle that she has been ignoring for months. I said that thinking that it would go over like the proverbial lead balloon – what is a lead balloon? – but Cindy is an enthusiastic puzzle doer and she sucked Cheryl along with her. I left to do a couple errands and take a walk.

Two hours or so later when I returned Cindy and Cheryl had not moved from the spots alongside the dining table where I unrolled the puzzle and reinflated the tube that the felt surface was wrapped around with the trapped puzzle pieces. Cindy had Cheryl hard at work sorting pieces of like color and they had assembled several chunks of pieces to figure out where they fit in the picture that came with the puzzle. They did not finish it that day. It is a half thousand pieces of a complex image of small town Christmas.

Lots of colors are involved. We bought this puzzle several years ago. I think we may have had it for a couple years by the time the pandemic broke into pandemonium everywhere. It came from a Barnes & Noble book store that we happened to be shopping in for one of the grandkids. Cheryl passed by the puzzles parked in the aisle and was inspired to retell the story about someone at Bridgeway Pointe assisted living facility who worked puzzles all the time and lived down the hallway from her mother. I remarked that she should pick one out to do for herself and she selected this Christmas scene.

Leaving it on the dining table is somewhat of an inconvenience at dinner time as I had gotten into setting the dining room area for two. We had used mostly the kitchen table when we first moved into the new condo and reserved the dining table for company. As I took on most of the cooking duties I decided to use the dining area more instead of preserving it for non-existent company. Had we stayed in our old house I suspect that I would have gotten to this point there also. For now, we are back in the kitchen for dinner.

For several days after Cindy’s inspiration we walked around the puzzle on the table awaiting Cindy’s return. I did not mention it. Cheryl once suggested that she could put it in her office and I persuaded her that it was not in the way of anything. She was worried that her little people that she sees occasionally would disturb it but they have not. Last evening she started to work on it. It was a spontaneous move on her part. She worked on it for a bit. I texted this picture to Cindy. She responded with, “Great! Don’t let her finish it without me.” There is not much danger of that, Cindy.

I checked on her during the evening. She worked on it for about an hour. She found two pieces that seemed to fit together but they did not. I was able to help her find a couple pieces and fit them somewhere in the picture.

Her memory seems to be going faster. She looks at a piece and as she looks at the picture the shape is lost in her visual memory. It is a long process.