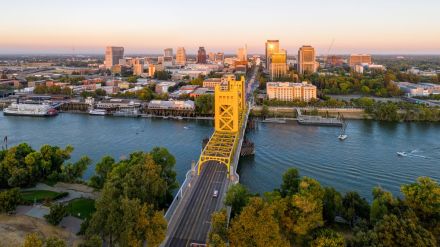 My daughter gave me a gift I may never be able to fully appreciate. In many ways I feel refreshed. I had not realized or believed how important it is for someone caring for another who has a chronic disease to be able to get away from that situation for a bit. It took a couple days for me to relax. My daughter somehow knew this and sort of pushed me into it.

Way back at the beginning of Spring I was two weeks past my second vaccination dose. I called my sister in Portland, Oregon whom I had not seen in person for about five years and asked, “What are you doing the end of April?” I explained the whole vaccination scenario. She was vaccinated also and over the past few months we had discussed traveling the countryside and having a hug tour. She has a very good friend in Florida and they got together about once a year somewhere. She had not been with Phyllis in awhile.

She suggested meeting up in Sacramento CA to visit for a bit, drink a little wine and attend our nephew’s wedding. What a great idea!

Over the course of several telephone conversations Joyce and settled on a little inn located in Freeport, California called Freeport Wine Country Inn. This turned out to be an ideal location for site seeing, wine drinking and visiting. It is a little inn with ten rooms and a bistro which was not officially open when we were there but probably is as I write this. California was not officially open yet, Gavin did not have his big announcement until the following week but the population was pushing in that direction. Next door is the Freeport Bar & Grill. An excellent location for drinks and dinner. Breakfast is available at the golf course on the other side of the Bar & Grill but we found the Cafe Latte about a mile up the road on Friday morning and went there everyday afterward. Overall neither of us had any complaints about our accommodations.

The Freeport Inn is a very low key relaxed inn run by Marnie and John. I recommend it to everyone. Across the street (Freeport blvd.) and up the levee is the Sacramento River and nice walking/biking path (albeit gravel) on an old railroad track. About six miles north on Freeport Boulevard is the California State Capitol building and gardens.

We traveled to Pittsburg for dim sum with the nephews one day. We traveled to Lodi another day to Stama Winery and Dancing Fox Winery for a little tasting and lunch. South Lake Tahoe made the agenda on the third day with lunch obtained from a sandwich shop and an empty picnic table facing the lake only made more perfect by a younger Hispanic woman cooking on a grill nearby for mom and dad and the rest of her family. It smelled heavenly.

The wedding happened on Sunday in the afternoon between two very happy people who seem very much in love.

Joyce and I parted ways reluctantly at the rental car return. At Sacramento International Airport there are two terminals and as near as I could tell there was no transport between them without leaving the secure area. Bummer. We were early for our flights. I was because Joyce was driving and her plane left about an hour before mine. Joyce was early because that’s the way she rolls. Sitting for a bit at the departure gate with a sandwich and a bottle of water, my phone played its little text message tune. My flight would probably be late into Dallas-Ft. Worth were I had to make a connecting flight. I settled in with my book to wait for what the rest of the day would bring.

Carpe week-em! If someone offers to keep track of your loved one for a bit while you travel and hang out, take it! Do not feel guilty. Two things will happen, that person will understand better what you have been dealing with and you will get some time off from a burden that you accepted gracefully but had no knowledge of how much it would narrow your world when you started.

It is called respite for a reason. My daughter kept a little journal of activities and gave it to me when I got home. We exchanged a lot of text messages in between and I called every day but she was with Mom.

The trip home was amusing but I did not concern myself with things I had no control over. This is something PD has taught me over the years.