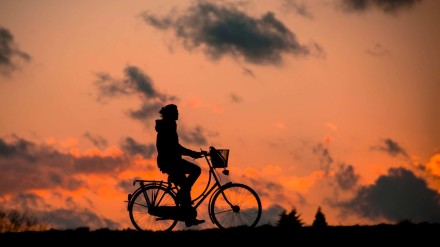 It is 73 degrees Fahrenheit. Blue sky sunny. Relative humidity 40 percent. What kind of day is it? Perfect. In Ohio, it is San Diego nice. Sweet! A perfect day to ride the bike a bit. Get some exercise.

And then there is Parkinson’s to consider.

How are you doing , dear? Feel okay enough for me to leave you for a couple hours? It is up to you. You were doing okay earlier before I went to the grocery but you seem like you are struggling a bit now. Should I stay?

Parkinson’s is a stickler for time management.

But the peach fruit pocket coffee cake made last evening with fresh peaches was good. This caregiver has three or four hobbies. Bike riding which I started back up a couple years ago. As a kid I enjoyed riding all over. As an old man I am afraid of other drivers so I stay on the bike paths were the cars do not go.

Baking came along in the late 1980’s as I became interested in bread making and trying to recreate a childhood taste memory of some of the bakery bread I enjoyed as a child. A bakery near us made absolutely the BEST seeded caraway rye bread. Alas that bakery has been closed for several decades. the site became a bank. It is now condominiums as every square inch of my childhood neighborhood is occupied by a new generation with their kids. All the neighborhood bakeries are gone. Lately I have been working on the Virginia Bakery cookbook. I have sort of stalled on the fruit pockets page.

As I became comfortable with making pastry dough, I started experimenting with various fruit fillings and making them. Plain old canned fruit pie filling works just swell except that the can contains about twice what is needed. Take any fresh fruit that you desire; strawberries, apples; black berries, cherries, blueberries, peaches, apricots, about a cup or so and add a half cup of water and a half cup of sugar (brown sugar and cinnamon if you are using apples) to a small sauce pan. Bring it to a boil and then simmer with the lid on for about 20 minutes. Crush some of the fruit while it is simmering. Let it cool to lukewarm. (Who was luke?) Add two teaspoons of tapioca to thicken it. Tapioca can be used directly from the box but it actually works better if it is ground. I use a cheap coffee bean grinder which is really a small blender. Set it aside for use later.

I have gotten way off into the weeds here.

A hobby that developed over the summer between my junior and senior years in high school is a love of computers and coding. In the summer of 1966, my math teacher taught a FORTRAN class (there is an old language) that sparked my interest in computers and control systems but more narrowly in computer languages and coding techniques. To me it is a hobby. I have never narrowed focus onto any specific language over the sixty or so years of this interest. FORTRAN, COBOL, APL, C, C++, C^, Java, Pascal, Python, yada, yada and yada. It is interesting to me as to how many different programming languages there are and how similar they are in construction and structure. Like engineering designs, there is always a better one coming. It is better, different and the same concurrently. Like human language there is another one spoken over there across the river. One that can relate the same content and emotions but will always have a slight problem with translation that will prevent the non-speaker from completely understanding the speaker.

And this blog. I have visited journalling off and on throughout my life. I am not good at it but it is a kind of therapy for the soul. An outlet to complain and whine about my lot in life. It is a place to tell stories and relate nuances of daily living. So here I am. No bike ride today but I am journalling instead. Perhaps I can ride tomorrow. (smiley face)

Even though PD has invaded every waking aspect of our lives, something can be learned from adversity. As I wrote that line I realized that not everything is bad or adverse. Just as not everything is good or favorable. Somethings are meaningless and unimportant and simultaneously neither bad nor good. An example might be politics and political speech.

Well being and mindfulness are examples of important things.

The weather tomorrow is predicted to be even better than today. It will be Monday. There may be fewer bike riders out on my favorite bike path. And suddenly adversity is turning into favorability and anticipation for a pleasant ride.